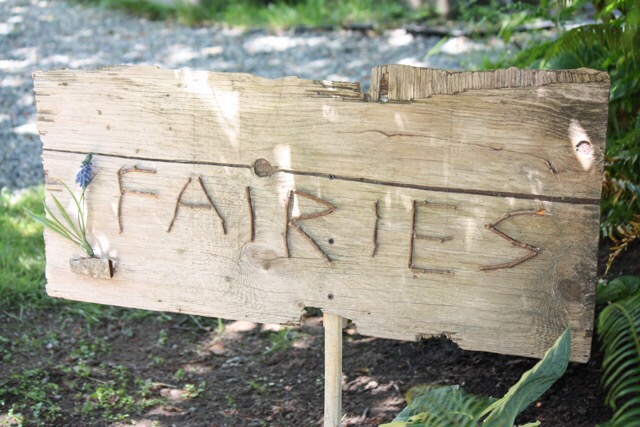 Our little girl turned 4 this year, and I wanted to do something special for her party. Something magical that she and her friends would be excited about, and maybe remember even after the party was over and the children had gone home.

I decided to plan a Fairy Birthday Party. First, my Mom and I created handmade invitations for my daughter’s friends. She had received another party invitation in the mail not long ago, and I saw the excitement she felt when she received a letter addressed to her. So I decided to go old school and make the invitations and mail them out.

In brainstorming with my Mom, we thought it would be fun to create little fairy houses hidden around the garden. The party quickly became a whole family effort. My Mom and I started creating fairy furniture and other items out of Popsicle sticks and twigs from outside. Soon my Dad was heading to his workshop after dinner each night to work on fairy doors, windows, seating … and even an amphitheater for the fairies’ concerts! 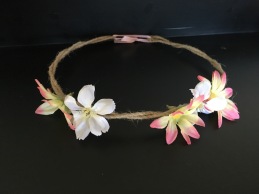 For the day of the party, I asked my best friend’s daughter (who is 12) if she would help me with the setup and running of the party. She did an incredible job! When the children arrived for the party, we started by doing some fairy face painting – well, my friend’s daughter did, and it looked amazing! We then gave each girl a fairy crown, which I had made using a wire raffia-type material and artificial flowers from Michaels. We gave each child a white gift bag we had decorated with stars and their name, to take with them on the tour.
We then led them around the yard searching for fairy spots! The fairy hunt began down a path marked with this homemade sign… 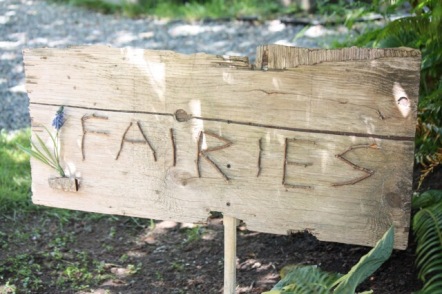 The first house the children found had a beautiful fairy door in the tree, fence, hammock, and fairy tutu hanging from a branch. 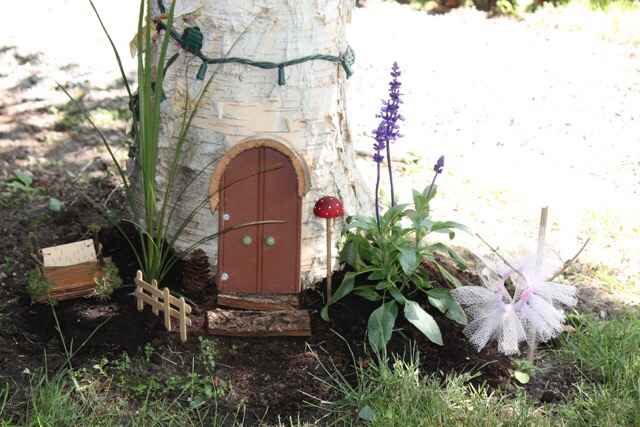 At this location the girls collected a homemade fairy wand to take with them on the adventure. 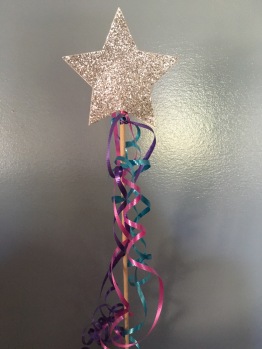 The children, led by my friend’s daughter, continued on to the next location. Here they found a beautiful fairy house by the river. There was a bridge over the river, and two beach towels hanging from a branch. There was also a picnic table outside the house, and a tiny fairy easel and stool (just visible at the very front left of the photo). 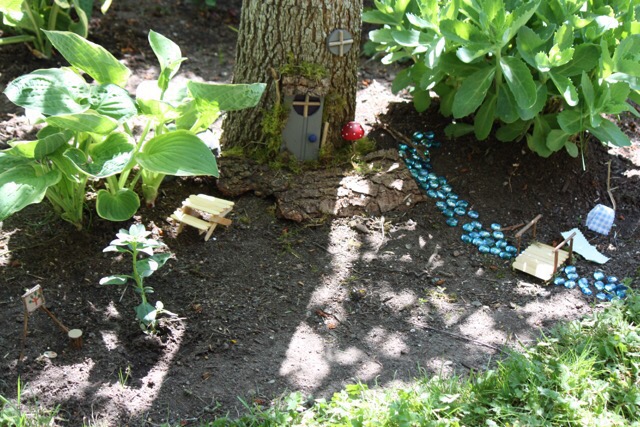 At this fairy house the girls collected a little bracelet.

Next, the group came across a little spot in the garden with a fairy swing, river, and toadstool. 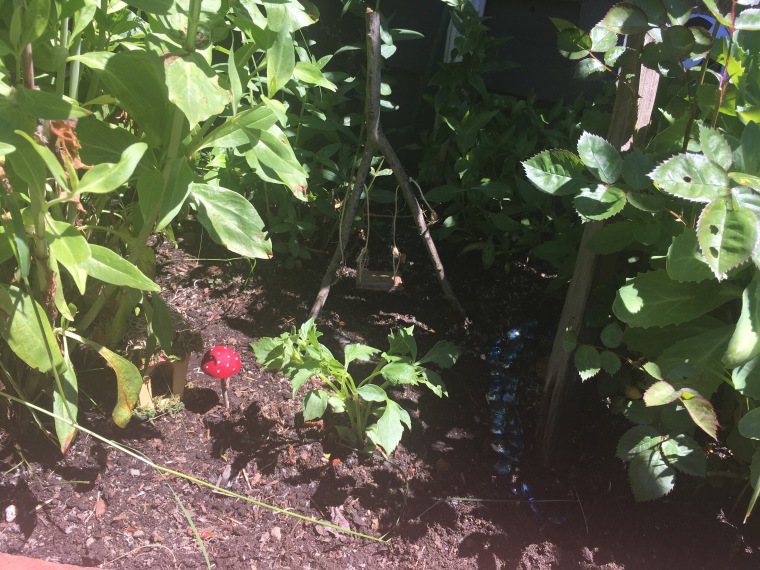 Here the girls collected a sheet of beautiful fairy stickers. 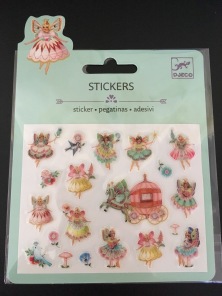 The children continued on to another fairy spot tucked away underneath a tree. This spot included a fairy door and patio seating, as well as the amphitheater and change tent for the performers. 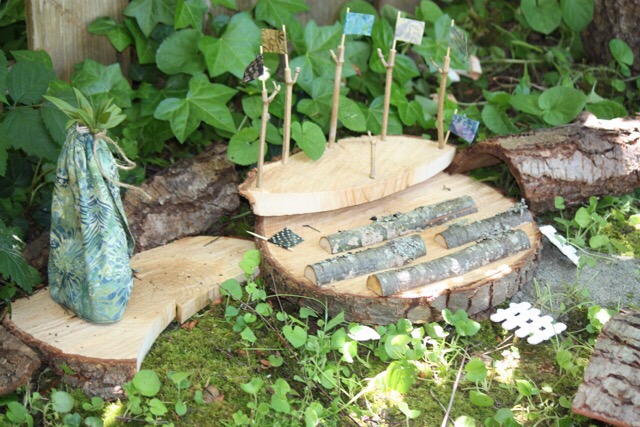 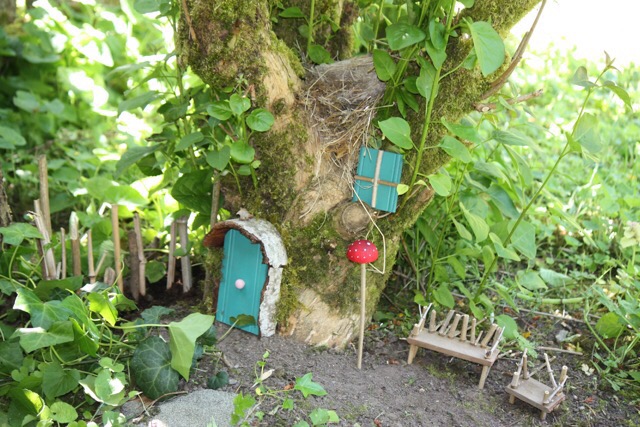 At this location the girls added a little bottle of fairy dust (glitter) to their gift bag. We had also set out a big blanket under the tree, and my friend’s daughter read the children the story of Lettice and the Fairy Ball (by Mandy Stanley). 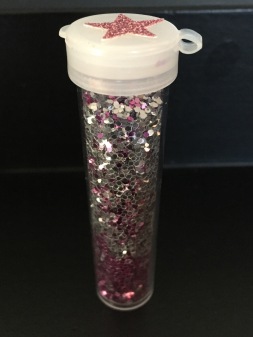 The final fairy location was lovingly worked on by my Mom, and was my favourite of them all. This house included a beautiful door, patio seating, fencing, and archway. 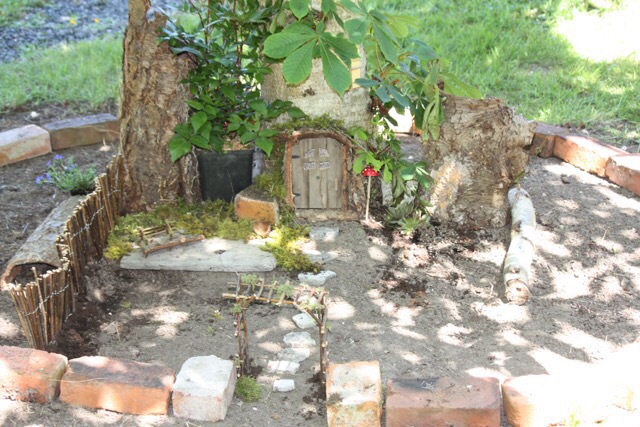 Here the girls picked up a silver pouch filled with mini glow-in-the-dark stars. 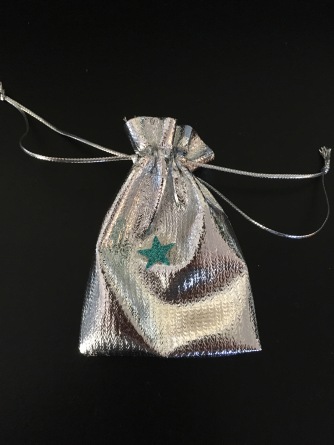 The fairy hunt was a huge hit with the kids. They exclaimed happily at the various houses and furniture they found along the way. One of the girls asked me whether she could take a fairy home with her (if you can catch one!) and my daughter was later found with a doorknob from one of the fairy houses in her hand: she told us she knocked but no one answered! I said perhaps they were out and she replied “or having a loud party!”

The girls loved the hunt, and were excited about the little goody bag of treasures they took home with them! We had one boy at our party as well, and I included little gifts at each station that I thought he might enjoy, instead of the fairy wand and stickers.

We still have the fairy doors up around the yard, and our daughter still explores them, knocking on the doors every now and then to see if anyone might be home!

5 thoughts on “Throwing a Fairy Party for your little girl ” 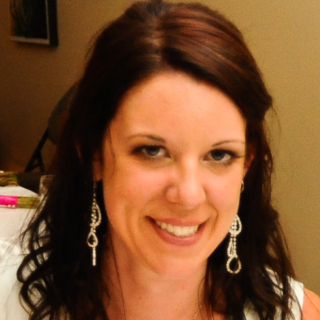